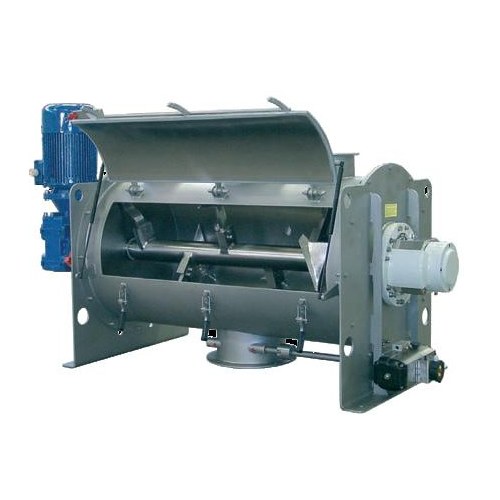 Plough shear is also known as ploughshare mixer, plough mixer, and plow mixer consists of a cylindrical drum containing plough shaped mixing elements that are mounted on a horizontal shaft used for processing fragile material, grains, granulates, cement concrete material, powder and viscous products. Plough shear mixer is widely used in the mixture of chemical materials, pharmaceutics materials, feedstuff, pigment and especially in the mixture of fragile solid grain, the mixture also having better mixing effect for the materials which has a great difference in grain and density.

The Plough shear mixer is designed to carry out the industrial process like Granulation, Sterilization, Coating, Reacting, Drying, and mixing. The Plough shear mixer is also designed for a heavy-duty blending of both wet and dry materials. Plough shape shovels mounted on the central shafts with its intended to penetrable through the dense powder mass in a cylindrical vessel or drum. The positioning, number, size, geometric shape and peripheral speed of the mixing. The shuffling of the mixture is achieved by the broader end of the shovels through plough shear mixer. Penetration followed by the agitation of the mass in quick succession. Results in the homogeneity of the powder mass in both wet and dry stages with the help of specially designed blades. In the later process, the appropriate dough formation is reached. The centrally mounted chopper will operate to obtain wet granules in a uniform size. The homogenous mass that is mixed can be easily discharged from mixing drum at the bottom which is provided with a flush discharge port. The common parts that are included in the Plough Shear Mixer are Nozzles, Vaccum/Pressure, Drive, Jacket, and Control panel.

Plough Shear Mixer is the most versatile mixer that is available with an extensive range of applications:

Features of Plough Shear Mixer are as below:

Use of Vibro Sifter in Dextrin Powder Manufacturing

Getting a job in pharma machinery manufacturing – An Overview

Importance of Safety and Disaster…